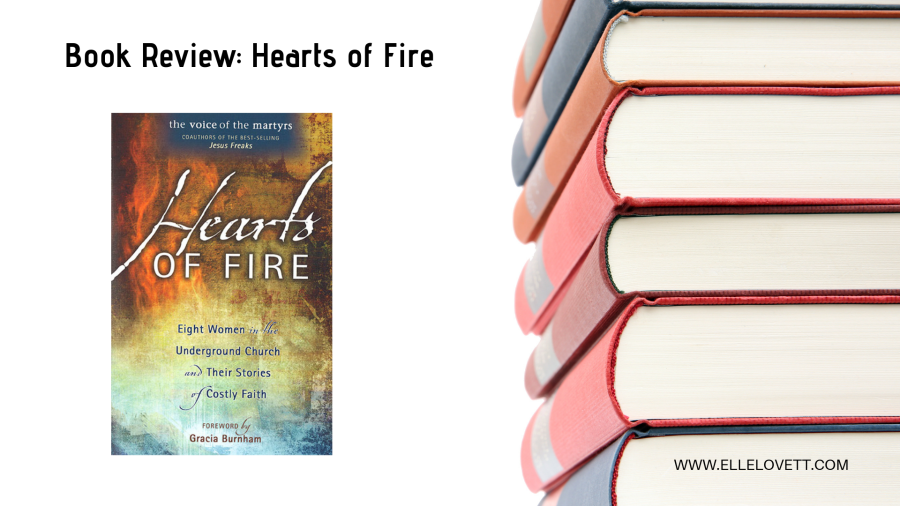 Hearts of Fire by The Voice of the Martyrs chronicles the lives of eight Christian women from eight different countries, all of which have been or still are persecuted for their faith. These women are from vastly different cultures, religious backgrounds, and governments, but have experienced similar atrocities and the same fire of God burning in their hearts to tell others about Christ.

Photo credit: Voice of the Martyrs

The Things I Liked

I wouldn’t recommend this book for a kid younger than 11. (Of course, depending on your kid!) While there isn’t too much gore in the book, they do describe a torture technique or two in relative detail (cringe-worthy for me), they discuss a forced marriage of a woman (who has a baby by that man) who was already married and she deals with guilt over that, there is a scene in which some missionaries are burned to death, and other such instances. If in doubt, I would recommend pre-reading it, but it’s quite all right for teens.

For me, this book is a “to read”! It encouraged me in my faith, and opened my eyes to what females around the world are going through for their faith and their obedience. An eye-opener for sure! I would definitely recommend this book to women and girls (men too!) that are interested in knowing what their sisters from around the world endure. Get ready to be challenged!

To purchase this book, head to The Voice of the Martyrs’ Bookstore. For a better deal, check out thrift sites online such as ThriftBooks. There’s almost always some free deal to get this book, so check into that as well!

Do you have any particular questions about this book before you buy it? If you’ve read this book, what did you think of it? Do you have any suggestions for other books I should review? If so, please let me know in the comments (or in my contact form, if you would prefer that). I look forward to hearing from you!

I'm a 17-year-old girl in love with Jesus who prays you know Him. I enjoy worshipping the Lord with music, learning languages, flying, studying, reading, playing pickleball, praying for folks, building relationships around the world, and traveling!