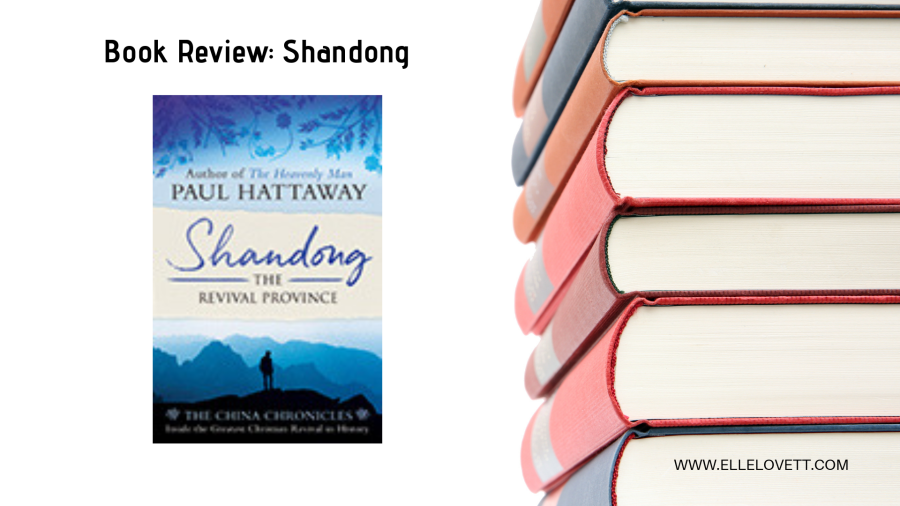 Note: I received this book for free from Asia Harvest in exchange for a review. I took waaay too long doing this review due to our recent mission trip, so I greatly appreciate their patience and generosity! Stay tuned for another review this summer on Guizhou, the second book in the China Chronicles series.

Shandong, an eye-opening decade-by-decade account of how God has moved in Shandong Province, China, is the first of the China Chronicles series, which chronologically sweeps over the history of the Christians in China one province at a time. This work by Paul Hattaway is an in-depth, 293-page history of the progress of Christianity in Shandong Province beginning in 1860 with the coming of the first evangelical missionary and continuing on to the present day, complete with tables and resources at the end. Encouraging and inspiring stories are sprinkled in this very historical book the whole way through. You’ll definitely finish the book with a different outlook on the Chinese ekklesia! (photo credit: Asia Harvest)

The Things I Liked

This book has very little questionable content, but I think the main issue would be that it’s too historically dense for most kiddos. There are a couple instances such as mentioning that rebels raped innocent females or that someone’s back was so infected that it split right down the middle and they were thrown in human waste. (These examples are actually the worst I can think of) However, these instances are few and far between, and are not described in great detail. None personally disturbed me, and that normally says something XD. As I said, this book is likely way too historical for most kids (it’s not a dry list, but it does read like a schoolbook toward the beginning; less so toward the end). My suggestion would be to read some inspiring excerpts during a family time for your kids to experience the encouragement of this book without the occasional scene or the historical aspect.

If you have connections to or an interest in God’s moves in Chinese believers, this book would definitely be an encouragement for you! I would especially recommend it to those of you who enjoy a good, deep history book.

I would recommend purchasing this book through Asia Harvest so you can be sure your money is going to good use to strengthen our Chinese brothers and sisters. For shopping on a budget, check out deals on ThriftBooks.com or other thrift sites.

I’d love to hear from you if you have any suggestions, comments or questions! Please feel free to suggest a book for me to review, ask questions about this book, or leave a welcomed suggestion on how these posts should be laid out. I’d also love to hear if you’ve read this book too! I look forward to your comment 🙂

I'm a 17-year-old girl in love with Jesus who prays you know Him. I enjoy worshipping the Lord with music, learning languages, flying, studying, reading, playing pickleball, praying for folks, building relationships around the world, and traveling!